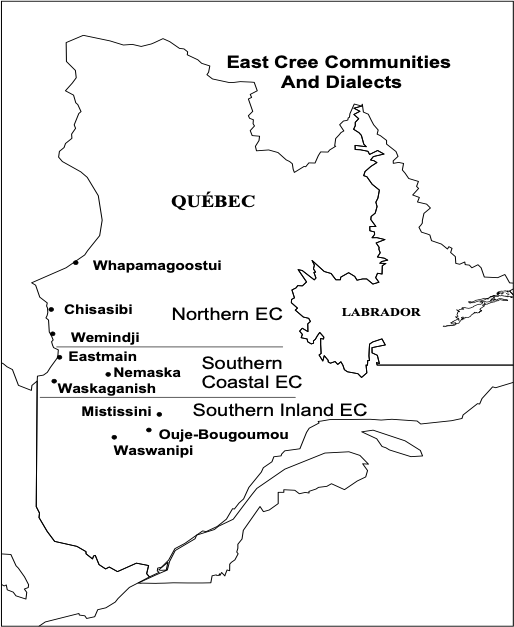 There are two main dialects of Eastern James Bay Cree, northern and southern. Each dialect has its own spelling conventions. (The ISO 639-3 code is  crl  for Northern East Cree, and  crj  for Southern East Cree).

The southern dialect area can be further subdivided into the coastal and inland dialects. The southern communities on the coast are: Eastmain and Waskaganish. The inland communities are: Nemaska, Waswanipi, Ouje-Bougoumou and Mistissini.

A common misconception with respect to the division of East Cree is that the two dialects are Inland and Coastal, bundling together all the Coastal communities from Waskaganish to Whapmagoostui. This geographical distinction does not accurately characterize the Cree dialects; the northern and southern dialect distinction is the basic divide and within the southern dialects a further distinction can be made between coastal and inland, as explained above.

The following table shows a few of the differences in pronunciation between the various East Cree dialects (reflected in the different spellings).