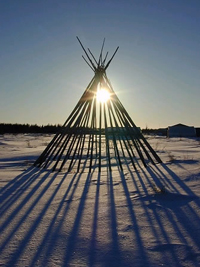 Two (2) things are required in your operating systems in order to type in Cree syllabics: (1) both a font (for the different character shapes) and (2) a keyboard (providing an input method of typing those shapes). Today’s standards require Unicode fonts.

To learn the syllabics and to see the mapping between the roman and syllabic orthographies , view the Syllabics Chart (requires Adobe Flash Player)- complete with spoken sounds.

There is also the Cree board

NB: Keyman application supports multiple languages so please makes sure to download the keyboard via the link https://keyman.com/keyboards/bj_cree_east or language codes crl crj

If you just need a syllabic font you can download our BJCree Uni font files.

Once you have downloaded and installed the standard package for your system, you can add other Unicode fonts. Avoid Euphemia UCAS and Arial MS as they do not display the correct sha and shu characters. (more…)

Cree syllabic fonts: development, compatibility and usage in the digital world. A paper originally presented at the 40th Algonquian Conference, in Montreal in 2008, by Bill Jancewicz and Marie-Odile Junker, that describes what are the best tools available to type in Cree syllabics in the area of information technology. There are also suggestions for best practices. Updated March 2011.

Unicode Cree Syllabic Fonts for Windows and Macintosh Updated Appendix. An updated appendix of a handout originally written for a presentation at the 37th Algonquian Conference, in Ottawa in 2005, by Bill Jancewicz. Updated May 2008

Unicode Cree Syllabics for Windows and Macintosh, by Bill Jancewicz. A paper that describes the tools available for free (in 2005) to type in Cree syllabics with PCs and Macintosh computers. October 2005.

[Unicode Cree Syllabics for Windows 5.0, by Bill Jancewicz. An earlier version (2001) of the above].

Cree on the Internet: How to Integrate Syllabics with Information Technology and the Web, by Bill Jancewicz and Marie-Odile Junker. A handout for a presentation made at the 34th Algonquian Conference, in Kingston in 2002.

Unicode Strategy : Syllabics and Computing in the 21st Century, by Bill Jancewicz. A paper that describes the situation (in 2001) regarding Cree syllabics fonts and the computers which support them or not. October 2001.

Answer to Frequently Asked Questions (FAQ) : Most of the questions people asked us (or we asked ourselves) during this project.

Video Tutorials on download, installation and use of fonts tools. In Cree, French and English (for Windows XP).