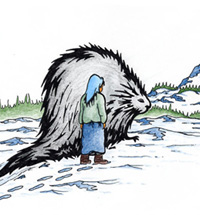 This page presents the complete ‘Hard Times’ text. The text is provided in literal and idiomatic translations. To read and listen to the individual lines of the text, refer to the Hard Times line-by-line page.

They found them, that one the late Philips was his name.
They had starved, they had wanted to eat.
Then we found it (body) the late woman in the teepee.
But the late man we didn’t find it (body).
At least but they were in-the-water nightlines.
There even we looked for it (body) the late man.
Already there were many his children.
He was tall already his son.
Not we did not find him also that boy.
There was a cache hanging there, that is where it was hanging that his furs the late man.

A family was found dead.
They found the woman and the children in the tent.
But they couldn’t find the man and his oldest son.
They looked everywhere.
And where they stored their food for the winter, they only found his furs.